Antique card catalogs are so beautiful.
I'd love to have one in my home someday.
Posted by Michelle Porth at 8:44 AM 5 comments:

The hubby and I met...
*drum roll please*
... in first grade!
Yep, that's right. Among crayons, picture books and glue.

These are our first grade class pictures! Isn't he cute?
He was the boy in glasses and a Boy Scout uniform, I was the girl in a dress with bows in my hair. Kyle quickly became friends with my twin Mark throughout elementary school, but then moved out of the school district until we met again in high school.

Here we are at the Senior All-Night Party-- our first picture together after we decided to start dating!
Eventually we ended up going to senior prom together in 2005 as "just friends" (Mark claims he set us up but I'm not so sure!) and our friendship grew from there. We had a sweet summer romance that year-- but then were parted by long distance when we went our separate ways to college.

Managing to remain strong through two years of LD, Kyle switched to OSU his junior year and of course we eventually committed our lives to each other in 2010. ♥ 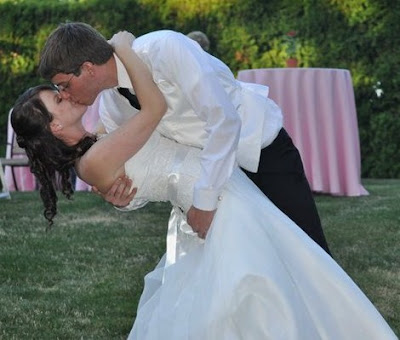 So there's our fairytale love story!
Thanks for reading.
I'd love to know how you and your significant other met :-)
Posted by Michelle Porth at 8:00 AM 6 comments:

Sometimes I wish I could wear a dress and be girly
every. single. day.
But then I remember I work with preschoolers. :-)
Here's to dreaming.

Cara headband via Nordstrom.
Posted by Michelle Porth at 8:00 AM 2 comments:

I definitely need to remind myself of this.
Therefore...

I love being a twin

I'm sure you guys have seen this before (it's been all over Pinterest lately) but I had to post anyway, if for no other reason than to have it in my records.

This picture is from an article titled "The Rescuing Hug" published in Reader's Digest, c. 1996. This set of twin girls was born 12 weeks early and placed in separate incubators. Kyrie (with the red dot) weighed 2 lbs. 3 oz and started gaining weight quickly. Her sister, Brielle, however only weighed 2 lbs. and had breathing and heart-rate problems. She also wasn't gaining weight like her sister, and within a few weeks went into critical condition, gasping for breath and turning bluish-gray.

The nurse tried to do everything she could think of to save this baby's life, but nothing was helping. As a last resort, she decided to try placing the twins together in the same incubator (which was uncommon at the time).

As the story goes, as soon as the incubator door closed, Brielle snuggled up to her sister Kyrie and instantly calmed down. Her heart rate stabilized, as did her breathing. Kyrie placed a comforting arm around her smaller sister and a photo captured it all. ♥

How sweet is that? You can view the whole article here. And now days apparently it is much more common to place twins in the same incubator, and scientific studies are being conducted on the subject.

I'm a twin myself (fraternal), so this story touches my heart. My brother and I have always been close, sleeping in the same crib when we were babies, sharing the same classes and friends all throughout the school years-- my mom even says that when I was little and had nightmares in the middle of the night, I'd go to Mark for comfort rather than my parents. 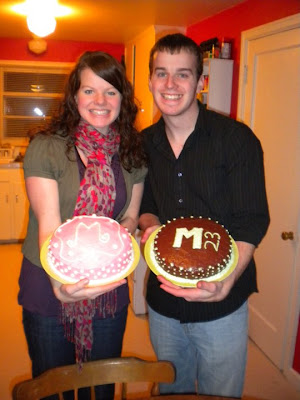 Celebrating our 23rd birthday together. Our friend Caity made us each a cake! 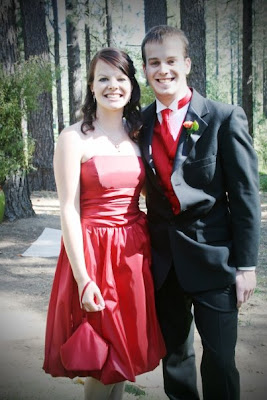 Here we are in the wedding party of some friends. 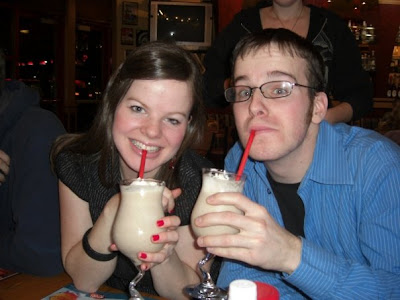 He likes to make goofy faces.
I love being a twin and wouldn't trade it for anything.
Posted by Michelle Porth at 1:30 PM 4 comments:

Meaningful Monday-- The voice of color

via here
"Mere color,
unspoiled by meaning,
and unallied with definite form,
can speak to the soul in a thousand different ways."
Oscar Wilde (Irish poet and dramatist, 1854-1900)
Posted by Michelle Porth at 7:10 PM 1 comment: 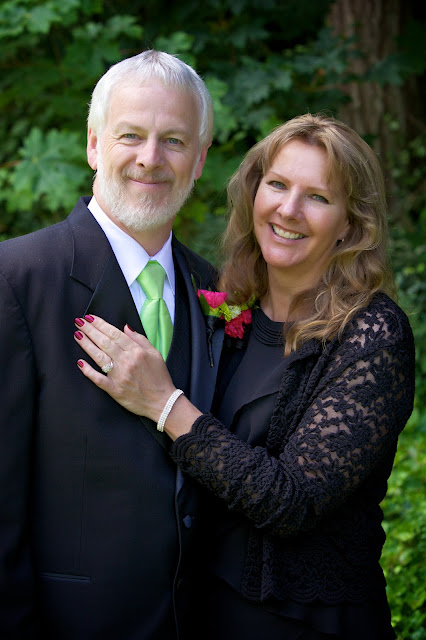 Look how cute they are!
Today, my mom and dad celebrate 34 years of marriage-- I'm so proud of them! With the divorce rates these days, I feel really lucky and blessed to have parents that have remained happily married for so long. And while their marriage may not always be perfect (Personally, I don't think any marriage is perfect)-- they know how to work things out, get over obstacles and truly love each other, rather than run the other way the second something goes wrong. They are some of the strongest, most faithful and caring people I know, and I truly admire the relationship they share. I love you, Mom and Dad!

P.S. If you're reading this Mom, please don't be upset about the posting of this picture (my mom hates having her picture taken), but I think you and dad both look stunning and so happy! ♥
Posted by Michelle Porth at 9:30 AM 3 comments:

via here.
It's so easy to get stuck in a rut sometimes, doing the same things day after day-- get up, go to work (or school), come home, have dinner, go to bed. Etc. etc. Hence why I love this thought. In order to keep growing, learning and becoming better versions of ourselves, we must try new things. We must venture out of our comfort zones, our everyday routines-- and take a risk. Explore something new. Go a different route.
So who's with me? Are you going to try anything new this week?
Posted by Michelle Porth at 3:00 PM 4 comments:

Happy Birthday to my love!

Today, my husband Kyle turns the ripe old age of twenty-four! (Although, I'm one to talk-- I turned twenty-four in January!) Isn't he the cutest? : 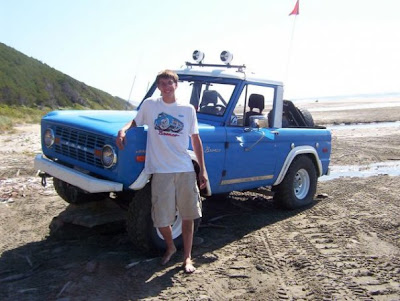 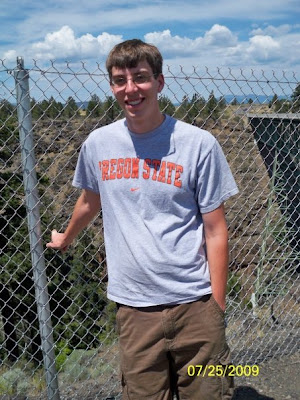 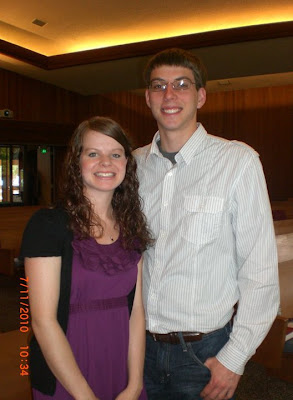 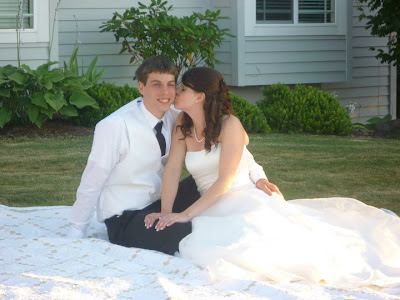 We met way back in first grade (more on that later!), started dating in 2005 and were married in 2010. He is the love of my life and means the world to me! He is such a caring, thoughtful and considerate man-- always helping others out, working hard and enjoying life. He makes me so happy!
Happy Birthday sweetheart! ♥
Posted by Michelle Porth at 9:00 AM 4 comments:

I can't believe how quickly this week has flown by! I've been so busy getting ready for Kyle's birthday (tomorrow!), our anniversary trip coming up next week (to Seattle!) and a million other little things. And of course there has been work and a little bit of garage sale hunting thrown into the mix as well. :-) I'm sorry I've been away from this little blog for so long!

Anyway, last weekend I went home to my parents place (in Portland) to celebrate the fourth. We had a wonderful backyard BBQ with lots of family (and I decorated with these little DIY gems from {Nifty Thrifty Things}-- they were a big hit!) But before all of that fun, the earlier part of the weekend was spent working on this: 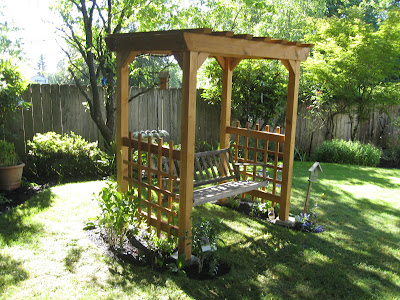 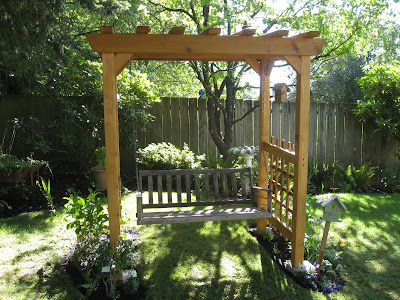 My mom has had that bench swing practically forever (I remember when I was little, we bought it at a garage sale for five dollars-- and then proceeded to cram it in the backseat of our car on my brother's and my laps!). The swing used to hang under a fort play structure my dad and grandpa built for us-- about 22 years ago!-- but unfortunately we had to take down our "playground" a few years back when it started to become unsafe. Since then, the bench swing has sat forlornly under our deck-- until now!

Isn't the arbor beautiful? And when I say "we" built it, I actually mean my dad, husband and brother. :-) I simply helped stain it after they were done (and I painted that little birdhouse stake off to the right of the arbor). Basically, I got all the fun jobs. :-) But I think it turned out wonderfully, and I'm really impressed with their work!

Now if only I had a backyard of my own... Someday!
Posted by Michelle Porth at 7:39 AM 3 comments:

I've been finding so many projects on Pinterest (follow me here!) that I want to try! Pinterest is such a great place for new ideas and inspiration. Here are a few items that have been inspiring me to get crafty:


A wind chime made of antique keys, locks and crystals

via here.
Book page art... I think I would photocopy a page (rather than ruin a book)
with a favorite passage, and watercolor a picture that represents the words.

via here.
A homemade pebble mat-- all materials found at the Dollar Tree!

via here.
Big leaf printing... gorgeous enough for me to make, easy enough for my preschoolers to try!

via here.
What's been inspiring your creativity lately?
Posted by Michelle Porth at 10:33 AM 4 comments: 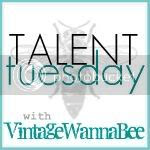 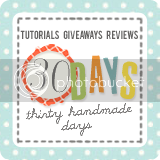